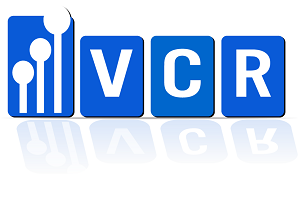 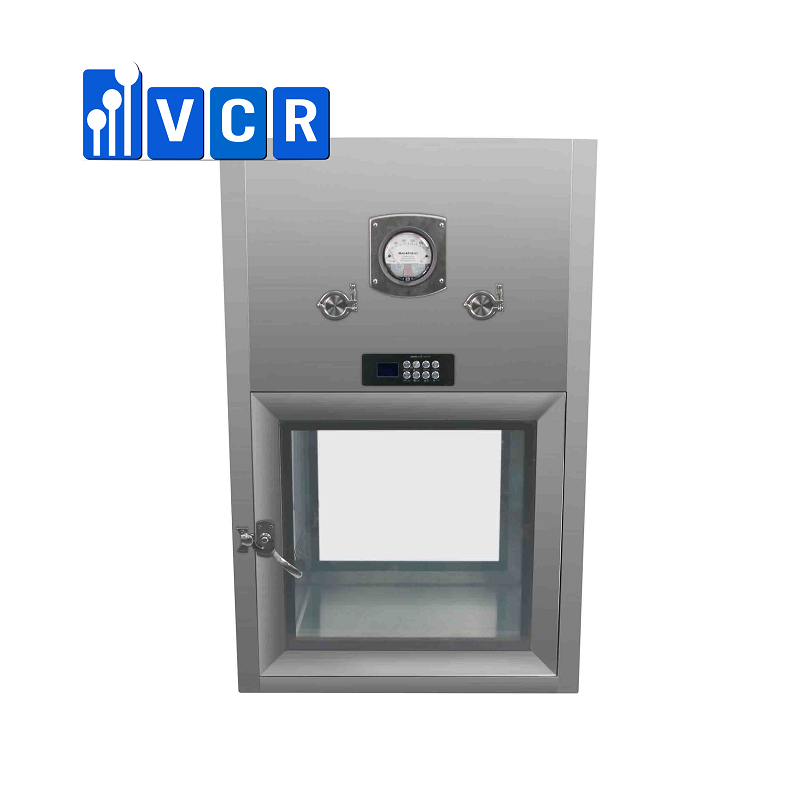 Pass box plays an important part in minimizing the risk of contamination in the cleanroom. Let’s find out the pass box qualification with VCR

Those who work in cleanrooms know it well: avoiding cross-contamination between rooms with incompatible cleanroom classifications is essential to preserve the desired ISO classification and maintain the integrity of products and processes. One way to achieve this is by minimizing material movement.

Non-viable particles and microorganisms can cause contamination in a cleanroom due to this entry and exit of materials within the controlled environments. With this in mind, it is necessary to design and correctly install material transfer equipment.

A pass box, which is also called a transfer hatch or SAS pass (sterile access system), works as a barrier between areas with different levels of cleanliness when materials do have to be moved. The equipment is used to transfer material from an area of lower cleanliness to an area of higher cleanliness, and vice versa.

All cleanroom pass boxes include a mechanical and/or electrical interlock system designed to minimize the risk of cross-contamination. This design ensures that only one door can be opened at a time, not both or more, thus minimizing the amount of “dirty” air that can enter the cleanroom.

Usually, pass boxes have a UV light lamp in them to remove the contamination that may enter during the transfer of material.

Three types of pass boxes are used in the pharmaceutical industry, these are:

The pass box qualification in the pharmaceutical industry is a quality assurance process, which involves documented evidence of consistency that the equipment works according to its purpose.

There is not a standard that defines the methodology to qualify a pass box, but it is possible to adopt the principles given in ISO 14644 and other standards because these boxes work much the same as a unidirectional airflow device.

The measurement range must be a cross-sectional area of the filter face perpendicular to the airflow. When using a single point measurement instrument, such as a hot wire anemometer, divide the filter face into a grid of equal sections, no greater than 0.09 m2 (see Figure 1). 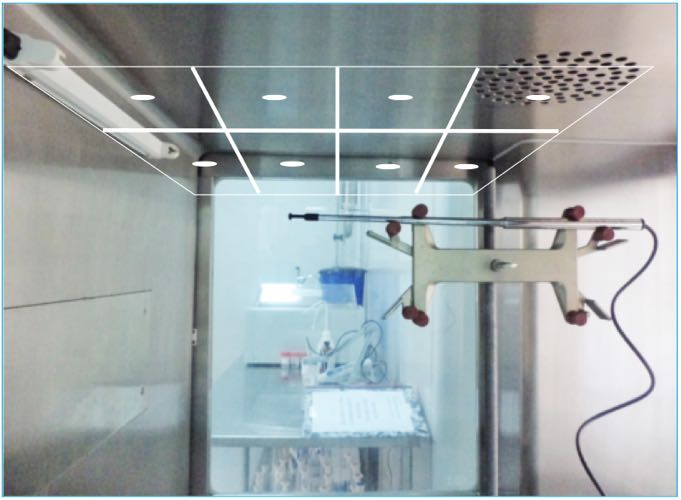 When using a multi-point instrument, such as vel-grid, make the sections no greater than 0.37 m2. Measure the airflow velocity at each grid point, 150 mm from the filter face, or from the protective grille over the filter. The average airflow velocity should be 0.45 m/s +/- 20%.

Equally, an airflow visualization test should be performed. The purpose of this test is to show the actual airflow pattern throughout the pass box. It can also be used to demonstrate the effects on airflow caused by equipment or “as used” condition.

The airflow visualization test is done using non-contaminating items such as visible vapor source or streamers of thread or string.

When ready to perform the test, place the output of the smoke source 150 mm from the filter face or the protective grille. Then disperse the smoke over the entire filter face and carefully observe the airflow displacement into the pass box. Smoke should also be released along the work surface. The smoke should flow smoothly, drawn from the release point towards the slots in the bottom or the sides of the pass box.

While conducting “as used” tests, release the smoke around the equipment inside the pass box. During the test, any lazy airflow observed may be caused by the equipment.

Testing the integrity of HEPA filters is yet another step involved in the pass box qualification process. This test is performed to confirm that the filter system is free of leaks. The test is performed by introducing an aerosol challenge upstream of the filter and scanning downstream to detect leaks.

The aerosol is fed into the air supplied to the filter in a manner that will produce a uniform challenge concentration at each of the filters being exposed at the same time. The filter face and the perimeter of the filter assembly must be scanned by passing the probe in slightly overlapping strokes so that the entire area of the filter is sampled. The probe should be held approximately 25 mm from the filter face and any aerosol photometer leaks should not have a penetration greater than 0.01%.

Inspections are also performed to determine the actual particle concentration within the pass box at the time of a test. In this case, place the particle counter in the center of the pass box work surface. Turn on the particle counter and measure the concentration of particles. The minimum sample volume should be 1 m3. The air inside the equipment must have met the acceptance criteria for an airborne particulate cleanliness class for a grade A.